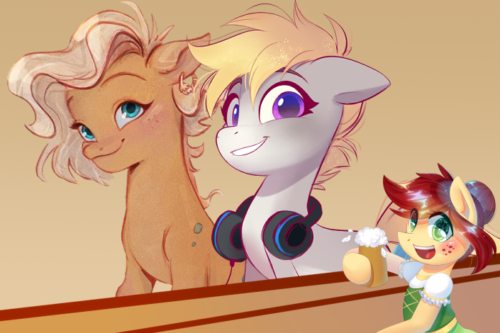 Imalou
Lea Dabssi, widely known as Imalou, is not only a highly skilled artist in the fandom and boasts an impressive portfolio of art, but also works as a character designer at Boulder Media in the 3D animation space.
From 2017 to 2020 she was involved in the movie “My Little Pony: A New Generation” and responsible for wonderful characters such as Sunny Starscout, Izzy Moonbow, Sprout and many more!

Celia Kaspar
Ceila Kaspar is a talented character designer and illustrator from Germany and has designed characters like Hitch, Zipp and Pipp in the movie “My Little Pony: A New Generation”! Besides MLP she has worked on a number of different projects such as the game “City of Love”, the BBC/ Netflix adaptation of “Watership Down” or her personal project “Zillarama”, a comic series which showcases her own distinctive and unique art style.